Louis was a cabin boy aboard the Aladdin that first summer. By the time the camp closed he was proud to have earned the position of first mate. Raised on the clean air and hearty food of Apple Island, he grew tall - six foot four - and lanky. He'd also become an accomplished scholar, winning awards first at Horace Mann school and later at Columbia. When the war came, the Skipper was recruited to work on the Manhattan Project, Lou continued his studies and also worked as a TA, and in their "spare" time they worked on a project to make airplane jet engines faster and more efficient. There was little time for the camp. I can only imagine their joy when the war ended and they could get back to normal.

Those dreams were dashed when, in 1947, the Skipper died suddenly of a  heart attack.
Posted by ilyanna at 11:48 AM 1 comment:

The Skipper and Sam filled every room with their energy, but the camp would not have been possible without Old George or Nell Edwards. Little remains of him but a worn portrait. Nell, on the other hand, left behind a house full of personality.

Ellen Edwards had served in the Red Cross with Sam and that acquaintance had inspired the initial invitation to the Aloha camps. During the school year Miss Edwards worked as a nurse at St George School in Rhode Island, but once the Bakers founded The Adventurers Camp at Dingley Dell she was game to join them. She bought a little house across West Shore Road and offered accomodations - and undoubtedly perfect British service - to the families who brought their boys up to the island in person. Nell adored the British royal family and on quiet nights would read about them while listening in her living room to records on the Victrola. She was a traveler, too, collecting a set of silver spoons from the Columbia World's Fair and candlesticks from Norway. We have no likeness of her; perhaps she was the chronicler who took our many pictures of The Skipper, Sam, Lou, and the boys on their travels.

The camp closed in 1938. There may have been talk about reopening, someday, after things had quieted in Europe. The Aladdin sat patiently on shore, still a landmark for passersby, sheets and lines stowed at camp for when they would be needed again.

In the meantime, The Skipper lent his genius to the war effort; Sam guided Louis through his schooling. When they could they escaped New York for Vermont, no matter how short their visit. Nell, too, spent as much time as she could in that idyllic place.

But their dreams of a future at Dingley Dell were not to be.

The boys already knew The Skipper and Sam from previous years at the Aloha camps, so it was no surprise that as soon as they arrived they were put to work mowing and painting and building. Evenings there were dances in the assembly hall with music (and girls) from the local community. They put on great plays, and recited poetry, Shakespeare, or passages from Dickens from the living room stage. There were feasts thanks to Old George, who had been a cook in the civil war and a vaudevillian sometime after. The boys laid a tennis court, and Sam judged matches from a concrete bench from which she could just see the lake.

But the heart of the Adventurers Camp (as it had been advertised) was lakeside. Under the enthusiastic (and undoubtedly authoritarian) eye of The Skipper, in just a few weeks the boys built The Aladdin, a lateen-rigged, 5 masted schooner-of-sorts which, like the Bakers themselves, defied categorization. Then those adventurers, those beautiful pirate boys, hoisted the rainbow sails and explored Lake Champlain - sometimes for weeks at a stretch - from Canadian waters down to Fort Ticonderoga. The ship was the talk of the papers both local and as far away as New York City. At one point a fellow named Walt Disney even stopped by for a cruise. And so, for eleven glorious summers, the Bakers made their dream come true. But war loomed once again...

The exploits of the camp are told far better (and with pictures) in the book "The Pirates of Dingley Dell" by Brett Corbin, so I will let his work speak for us both (if interested I can pass you his contact information). 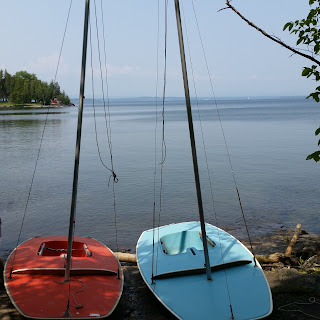 Thus far we have known our heroes as Frances and Marion. By the time they became camp directors, however, they had more apt names. Come winter, when he returned to his desk job as a mechanical engineer, Mr. Baker may have been Godfrey. But at camp he was called The Skipper. And Marion, who had already tried on the identities of traveler, nurse, war hero, and mother, had long before chosen from Dickens (her favorite author) the nickname Sam - after Sam Weller, the beloved and amusing sidekick from the Pickwick Papers.

No wonder, then, that their new summer home was given the fanciful title Dingley Dell - after the peaceful, cozy, and joy-filled retreat where the Pickwick Club secluded themselves. For that, my friends, is what the camp became for the Bakers - and the crew of boys who signed on to become the Pirates of Dingley Dell

Francis and Marion were the kind of people who chafed at being told what to do. It was natural, then, for them to decide that they wanted their own summer camp. A sailing camp - which meant they needed to be on a lake. It had to be reachable from New York. And they needed enough space to do big projects. We don't know much about how they found South Hero. We do know that the land had a log cabin dating to early settlement, and a two- story farmhouse with an attached woodshed. It was a start.

They converted the woodshed to a kitchen. They took out the woodstove in the middle of the house and Marion built a whimsical fireplace, meant to look like an elephant with it's chimney trunk raised. They cut through one wall of the house and attached the "assembly hall" - a large open space with a balcony at the far end. There was room enough for dances and dinners. They hung a maroon velvet curtain in the opening and the living room became a stage. Two dozen wooden camp chairs were delivered from Macy's at 25¢ apiece - seating for parents and campers. They added a smaller dining room next to the kitchen. Marion created an advertising flyer. Then they waited...

Marion stayed with her soldiers long after the war ended, but finally returned to New York - and Godfrey. They were married Christmas day, 1919. He worked as a mechanical engineer. She started the Home Nursing Service working with the poor of NYC. It was a good life, made better when their son Louis was born.

They had a robust social life, hosting dinners for international student at Columbia, getting involved with folk dancing groups. But the city drained them. Godfrey knew they needed to restore their minds and their bodies. So when Marion's wartime nursing friend, Ellen "Nell" Edwards suggested they join her for a summer as staff at the Aloha camp in Vermont where she served as a nurse they jumped. Their tenure was magical - Godfrey taught sailing, and when on land led campers in building an epic Spanish galleon themed boathouse/dock with a drawbridge. Marion produced and directed dramatic performances that included every camper.

Marion had crossed the Atlantic alone at age 16. From one brother's home in New York she had crossed the United States to visit another in Nevada. She had survived the 1906 San Francisco earthquake, and in her travels she had even walked partway across the Isthmus of Panama. But the Great War just about destroyed her.

A born leader, Marion rose through the nursing ranks to the dubious honor of head nurse of an American hospital serving Verdun. When a ship loaded with relief nurses was sunk, she and her colleagues still met the relentless waves of shredded young men with endless courage and kindness. We have a stack of silver plate photos showing before and after portraits of some of the boys who passed through Marion's hospital, barely repaired before being thrown back into the fray.

After the battle, the story goes, Marion was ordered to HQ for a medal; she went AWOL instead, unable to face the pomp and circumstance.

Through it all, Godfrey waited for his girl.